7 Ways To Be Effective When Leading By Example 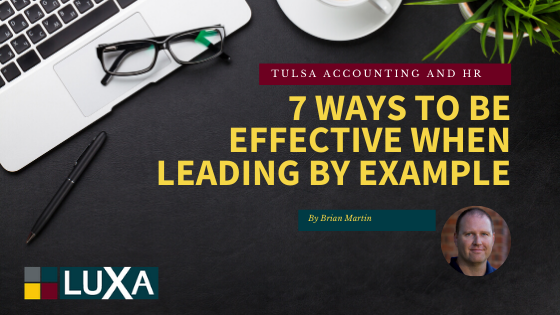 According to a 2015 Global Workforce Leadership Survey from Saba, 46% of companies say that leadership is a hard skill to find among employees. That’s in contrast to other information from that group, which indicates that 68% of American workers view themselves as leaders.

What defines a leader is often what a person does rather than what he or she says.

Leading by example is the best way to ensure that others also recognize your leadership abilities. Here are a few ways in which you can do just that.

Be Willing to “Get your Hands Dirty”

Eleanor Roosevelt once stated that “It is not fair to ask of others what you are not willing to do yourself.”

Indeed, the idea of be willing to do the same work as those below you is essential to the concept of leading by example.

It’s easy to ask others to do something when you have never performed the same task yourself.

On the other hand, when you do the same tasks as your subordinates you will naturally have a greater appreciation for what it takes to actually get the job done.

By rolling up your sleeves, your employees will see that you are not afraid to do jobs that other supervisors might think are beneath them.

Working side by side with others will help you establish trust among your team members as well.

You cannot expect other people to follow rules that you are unwilling to obey yourself.

For example, if you do not follow the company’s dress code or attendance policy, you will have a hard time getting your others to do the same.

Additionally, any credibility you have as a leader could be destroyed in the process.

Your workers may assume that if you get by with certain things, then they should as well.

Disciplinary actions are more likely to bring about resentment, particularly if they stem from rule violations that you are also guilty of.

The idea of following rules applies to all policies big and small. Accordingly, you should never try to bend the rules just because you are in a leadership position.

An unofficial policy in most organizations involves taking responsibility for one’s actions.

Again, this is an area in which your employees will look to leadership as an example. If you are constantly making excuses for your own behavior, others will feel it is okay to do likewise.

Not only will this destroy trust between team members, but it can also eliminate any trust your workers may have in their management.

Taking responsibility for your own actions may sometimes require you to humble yourself and say ‘I’m sorry.”

If there is anything you need to apologize for, making amends will help restore trust so that others can see you as an effective leader.

It will even go a long way toward encouraging others to resolve their own differences.

Employees expect you to give them feedback on their job performance from time to time.

What they do not like is one-way communication that does not afford them the same opportunity at least occasionally.

Psychology Today has listed eight characteristics of a toxic leader. At the top of that list is an unwillingness to allow feedback. When it comes to accepting feedback:

Hold Yourself to High Standards

Even if you are not aware of it, your subordinates are always watching what you say and do.

Chances are they will also emulate your behavior to a certain degree. This is one reason why Forbes claims that “leadership has by far the largest and most direct effect on company culture.”

Always assume that people are watching, and strive to act in a manner that will make them feel proud. That doesn’t mean that you should put on airs, but rather that you should behave professionally and maintain a positive attitude at all times.

Always see to it that you are living up to the same expectations you have of others.

Being honest and taking responsibility for your own actions go hand in hand.

Even so, maintaining honesty goes a step further, requiring that you also take care not to mislead others. This means you should never make insinuations that others would later mistake for a lie.

An example of this would be when hinting that someone will receive a reward when you really have no intentions of actually providing it.

It’s important to maintain honesty when asked a direct question. Be truthful in your responses, and if you do not know the answer to something then say so.

At the same time, do not leave the other person hanging. Instead, offer to research the issue and get back with him or her-and then be sure to do it.

There may be times when answering a question isn’t possible.

An example of this would be when someone is asking for information that might be confidential. In that case, be clear as to why you cannot answer the question, but do not dismiss the individual who is asking in the process.

Know when to Ask for Help

Part of being a good leader involves knowing what your strengths and weaknesses are.

As such, if you need help in an area such as accounting, payroll, or human resources, asking for assistance shows you have a keen sense of self-awareness.

In turn, this can make others assess their own strengths and weaknesses as well.

Outsource these functions to us so that you can focus more on becoming a great leader and building your team. To find out more, please contact us.