How to determine if I have a contractor or employee? 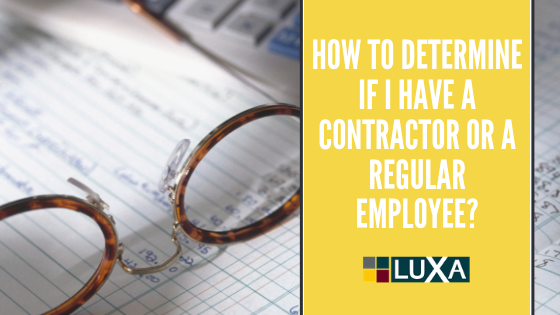 There seems to be a trend for companies to utilize independent contractors rather than hire employees onto the payroll.

Many employers mistakenly believe that the decision to classify someone as an employee or a contractor is solely at the discretion of the company.

The IRS has specific guidelines to help employers understand the difference but not all companies know about or follow the rules.

There are a few things to consider when determining if the position should be classified as an employee or independent contractor.

If the position requires the employee to be directly supervised regarding how, when and where to do the job then there is no question that employee should be classified as a traditional W2 employee.

If the company only has the right to control or direct the result of the work and not the means and methods of accomplishing the result then the position can be classified as a contractor.

According to the IRS, there are 3 main categories that provide evidence of the degree or control and independence:

Behavioral: Does the company control how the worker does his job?

Financial: Does the company control things like how the worker is paid? Are expenses reimbursed?

Type of Relationship: Are there written contracts or benefits (insurance, 401k, vacation pay, etc.)? Is the relationship temporary or will it continue?

Businesses must weigh all of these factors.

There’s no set number of factors and no one factor stands alone in making the determination.

The key is to look at the entire relationship, and consider the degree to which the company directs or controls.

Making the incorrect determination regarding employee classification can have serious consequences.

If a worker believes they have been misclassified as an independent contractor they may file a complaint with the either the State or Federal Department of Labor.

If it is determined the misclassification was unintentional, the employer faces the following penalties:

If the IRS suspects intentional misconduct or fraud, it can impose additional fines and penalties.

Recent law debate over contractor or employee qualifications in California

Recently, the state of California is undergoing a change in their labor laws and below we outline some of the recent proposals according to a recent article Did California Just Kill the Gig Economy?

In 2018, the California Supreme Court handed down its ruling in the case of Dynamex Operations West, Inc. v. Superior Court of Los Angeles. The ruling, now known as the “Dynamex decision,” dealt with the employment status issue of contracted delivery drivers and instituted the “ABC test” as a means of determining whether or not a person is an employee or a contractor.

The ABC test specifies that a contractor must be:

For more help and questions on your Human resources needs visit us at www.luxa.us and set up a consultation with one of our HR team!